A world-renowned aerospace, defense, security and advanced technologies company needed to move some of its manufacturing operations from Ohio to New York. The 32 machining tools that had to be relocated as part of the move included massive lathes, milling machines and other assets. Three of the machining tools were so large that each required nine semis to transport the disassembled components.

To do the job, the company gathered a team composed of representatives from four companies, including

“It was a very precise operation,” the client says. “The Mazak mechanics had exact procedures for how to dismantle and lift each component as it was moved. When you are working with equipment this big and expensive, it has to be done right.”

Considering the size and duration of the job – it took a year and a half to complete – it’s no wonder that the client describes the scheduling as “a nightmare.” But he says there were no problems because CEI was always able to take care of his needs. 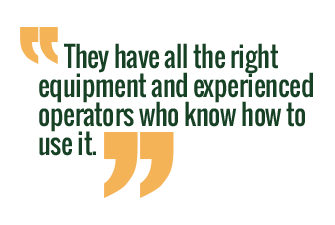 As moving jobs go, the construction manager says the company's move was greatly simplified by the professionalism of the team members, including Canton Erectors.

“Of course the Mazak guys know their equipment inside and out,” the client says. “You could say the same thing about Canton Erectors. They have all the right equipment and experienced operators who know how to use it.  When you have good people with the right skills, experience and attitude, it makes even big, complex jobs easy.”

Experience was especially useful on this project because some of the lifts were complicated. The client says they previously worked with riggers that had to devote time figuring out how to do it. The Canton Erectors team members had the experience to keep the job moving.

“We would look at a piece of equipment and the door it had to go through, and we knew it wouldn’t fit,” the client says. “Then they would figure out a way to make it fit.”

That experience also showed in the fact that there wasn’t a single lost-time injury during the project.

“Especially on jobs like this, with unusual lifts, it’s easy for someone to get hurt,” the client observes. “But the guys from Canton Erectors understand that an injury hurts everyone involved in the project. We had zero issues, and they get a lot of the credit for that.”

This client says that out of all the organizations he has worked with in his role as a construction manager, Canton Erectors stands out as one of the best.

“The job was a tremendous success due to the relentless dedication of the Canton Erectors team,” he says. “They were determined to get the job done, with a sense of urgency to get those machines installed and operating in their new location. They are nothing short of exceptional.”

Get the job done right the first time with help from Canton Erectors and our wide range of rigging and moving services by requesting a quote below.