While the 2016 Pro Football Hall of Fame Enshrinement Festival came to a close, the crew at Canton Erectors Inc. (CEI), waited behind the scenes at the Tom Benson Hall of Fame Stadium. 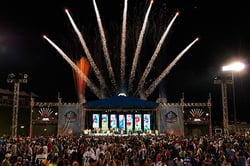 A leader in rigging and heavy hauling services, CEI set-up and dismantled the stage used for the festival’s activities, including the Concert for Legends, the enshrinement ceremony and the NFL kick-off game.

CEI Owner Brian Selinsky said although his company had worked at the festival in years past, this year, the lifting needs were different.

“Previously, we typically just set-up the light towers or stage towers,” Selinsky said. “This year, with the whole new design of the stadium and the completely new stage, we helped in a much greater way to provide crane service.”

Part of the stage disassembly required lifting the stage’s roof to a height of 90 feet. Knowing that the work required long reach and quick mobilization, the company used two of its largest cranes, the 110-ton Liebherr all-terrain and the 240-ton Grove all-terrain.

Operating under a tight deadline, CEI completed the job within seven hours.

“For our part, everything went smoothly,” Selinsky said. “I think the dismantlement crew was extremely pleased.”

CEI has previously provided lifting services for the Pro Football Hall of Fame, including erecting a series of three 66-foot-tall flagpoles in June 2016.

Selinsky said he’s looking forward to the upcoming expansion with the Johnson Controls Hall of Fame Village, a sports complex, hotel and conference center expected to be complete by 2020.

“I think it’ll be a great boost to the Canton economy,” he said. “It’s an exciting time for our community.”