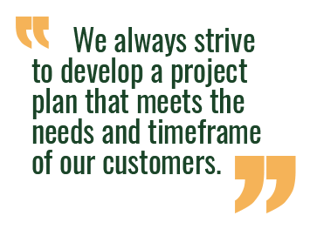 Due to the weight and height of the antenna, it would be a challenging process to take it down. That's when Canton Erectors stepped in. 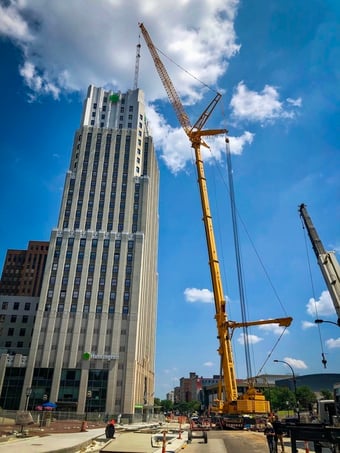 Why pay for a radio antenna that is no longer being used? Western Reserve Public Media no longer needed the Huntington Bank antenna due to the new one they built in Copley.

The CEI team began preparing last fall, having to coordinate the project with other renovation projects happening on Main Street in downtown Akron. The crew was comprised of four CEI crew members, but the entire project included about 20 people to ensure safety of the building structure and all involved.

“This project posed a unique challenge for our team, but one that we were excited to take on,” said Canton Erectors President Brian Selinsky.

Instead of removing the radio antenna in one swing, the best approach was to remove it in two pieces. CEI utilized a 600-ton crane to take down the 6,500- and 10,000-pound sections of the 8.25-ton antenna. With the set up and teardown of the crane itself, the project took a week to complete; however, the antenna only took one day to be removed.

“We always strive to develop a project plan that meets the needs and timeframe of our customers,” said Selinsky. “With this project, our team went above and beyond to exceed those expectations.”

The initial project was estimated to cost $250,000 but totaled less than half of that at $100,000. Ultimately, saving Western Reserve Public Media more money than originally estimated.

Looking for a rigging and moving company that will save you time and money on your next project?
Learn more about Canton Erectors and our capabilities by filling out the form below.