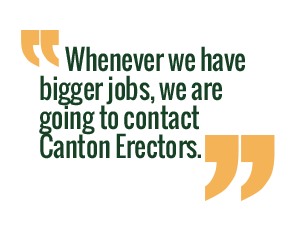 Standard Plumbing & Heating, in business for over a century, specializes in installation and service of commercial and industrial HVAC systems, piping and plumbing and full-service boiler and chiller work.

Standard’s assignments include installation of very large chillers and large indoor air-handling equipment. They most frequently rely on CEI for rooftop equipment installation. Canton Erectors transports the equipment to the job site, lifts it to the rooftop, then precisely positions it for installation.

As the President of Standard Plumbing & Heating, and someone involved with the business since the late 1970s, you would think that Dave Grabowsky could tell you when the company first contacted Canton Erectors. But the relationship between the organizations actually predates Grabowsky’s first day on the job.

“Whenever we have bigger jobs, we are going to contact Canton Erectors,” Grabowsky says. “We schedule the work, and we know we can count on them to take care of it. We like the fact that they are family-owned and operated, and that you know the people you are dealing with.”

Grabowsky knows Canton Erectors has a wide range of capabilities and services but understands they can’t fill all of his needs. 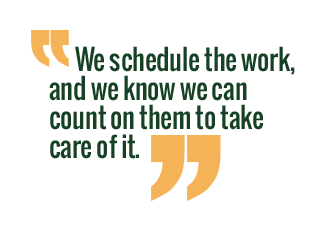 “When I need a 250-ton crane, I know that’s beyond what they can handle,” he admits. “But for any job that’s within their scope, they are going to have a chance to bid on that work; because I know they’ll do a good job.”

And when Grabowsky awards a job to Canton Erectors, he feels confident that the bid price will be the final price.

“We get bids for many of the services we buy,” Grabowsky explains. “With some suppliers, if you deviate even slightly from what was in the bid or if something unexpected comes up on the job, you know you are going to get dinged with added costs. Canton Erectors isn’t like that. They don’t nickel and dime you; they just take care of things.”

Both Grabowsky and Canton Erectors’ President Brian Selinsky are lifetime Canton residents who share a deep interest in their community. When Standard had the opportunity to do some work at the Pro Football Hall of Fame, Selinsky made it clear that he wanted to be part of that project. As his team lowered the equipment into place, he was there with his camera to document the work.

“They are very reliable and easy to work with,” Grabowsky says. “I have recommended them to others in the past and would recommend them to anyone today.”

Contact Canton Erectors by filling out the form below before starting your next project to ensure you have the right equipment to get the job done right.